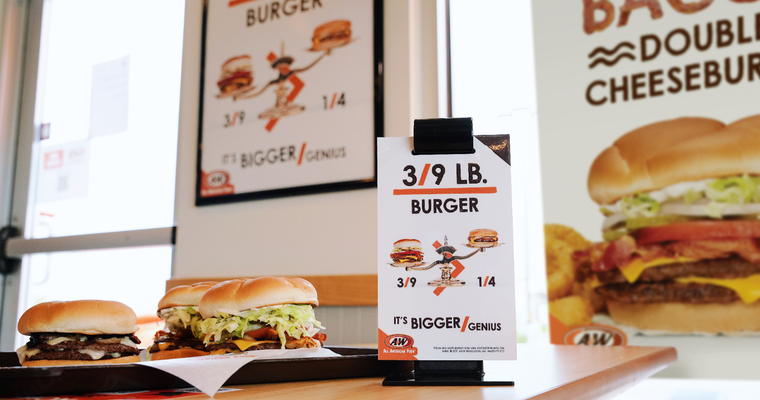 A&W Restaurants is releasing a clever marketing campaign for it's 1/3-pound burger in response to a decades-old marketing mishap that's seen renewed interest on social media lately, according to a press release.

In the 1980s, A&W tried to compete with the immensely popular McDonald's Quarter Pounder by offering a bigger, juicier 1/3-pound burger at the same price. Unfortunately, Americans aren't so great at math. Confused consumers wrongly assumed that 1/4 was bigger than 1/3 (You know, because 4 is bigger than 3) and the whole experiment went down in history as a huge marketing fail.

Now the company has rebranded the burger as the A&W 3/9-lb. Burger. The 3/9-lb. Burger ad was launched with a video, and a number of creative assets like window clings, table tents, branded memes and GIFs were created for the promotion.

"This story has been circulating for years," Liz Bazner, director of marketing at A&W, said in the release, "and every few months it seems to gain momentum and reappear on social media. We've gotten tons of questions about it, but prior to now we haven't been proactive about setting the record straight. We're excited to have found a way to finally let America know that our burgers really are bigger and really are better."