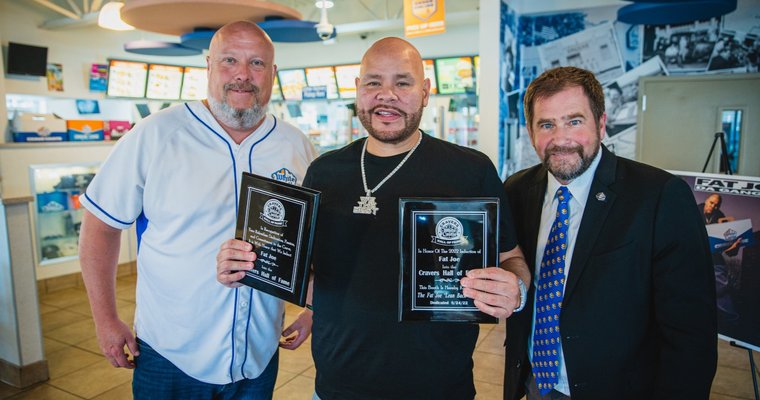 White Castle has inducted hip-hop artist Fat Joe into its hall of fame, according to a press release.

The ceremony occurred at the White Castle on 1677 Bruckner Blvd. in the Bronx, a borough of New York City. The White Castle Town Crier, dressed in full regalia including a navy-blue coat and breeches topped with a tricorn hat, inducted the hip hopper into the Cravers Hall of Fame. A booth in the restaurant is now known as the "Fat Joe Lean Back Booth," a nod to his 2004 classic song and in his honor.

"The Cravers Hall of Fame honors our loyal fans who represent the best of White Castle, and Fat Joe embodies that lifelong dedication," Jamie Richardson, vice president of operations for White Castle, said in the release. "We share the same values, including family, humility and commitment to the community. We're grateful to have someone such as Fat Joe as an ambassador."

"I've been everywhere in the world you can think of, but I still appreciate the love from White Castle," said Fat Joe at his induction. "If you're from the Bronx like I'm from the Bronx, the White Castle in my neighborhood was a flagship location. I've been coming to White Castle with my aunts, uncles, mother and father, wife and my kids, and that's what it is all about."

Since the Hall of Fame's beginning in 2001, a total of 273 inductees have been honored with this award. In 2002, White Castle created a "Craver in Extremis" category to recognize public figures and pop icons, including Fat Joe, who have publicly expressed their love of White Castle. Others honored among the Cravers in Extremis include Alice Cooper, Telfar Clemens, Adam Richman, Kal Penn and John Cho, and the late Stan Lee.

White Castle operates 350 restaurants. The company is based in Columbus, Ohio.